Oh and the wheels have the 90 degree valve stems so filling them is easier than regular valve stems. Not bad for a $500 lowballs offer on the face page.

Picked up a 1999 Durango steering box from Pick n Pull for $80. Might give drilling and tapping for hydraulic assist a shot. YouTube makes it look easy. Pieate4x4 makes it look tedious. This thing was covered in dirt and grease. Nothing binding when I turn it lock to lock. 3 turns is what I get with some channellocks on the shaft. If I decide to rebuild the entire thing I’ll tap it for hydro. If I feel like losing $80 I’ll try drilling without taking it apart. 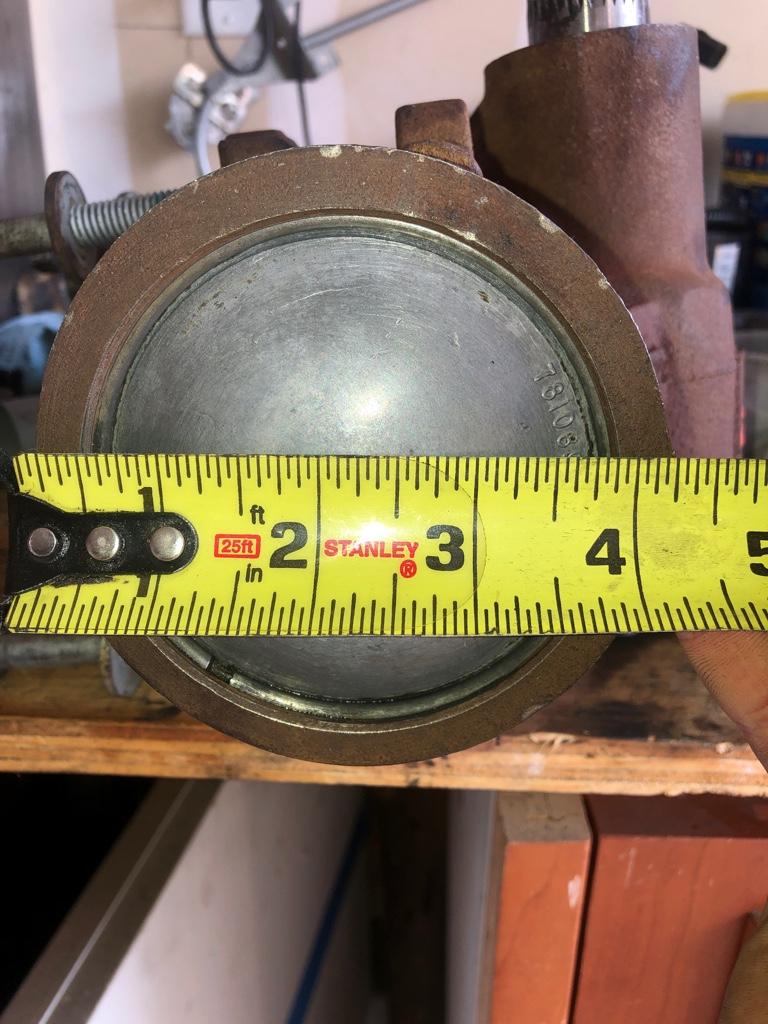 Milwaukee impact made easy work of taking off the pitman arm 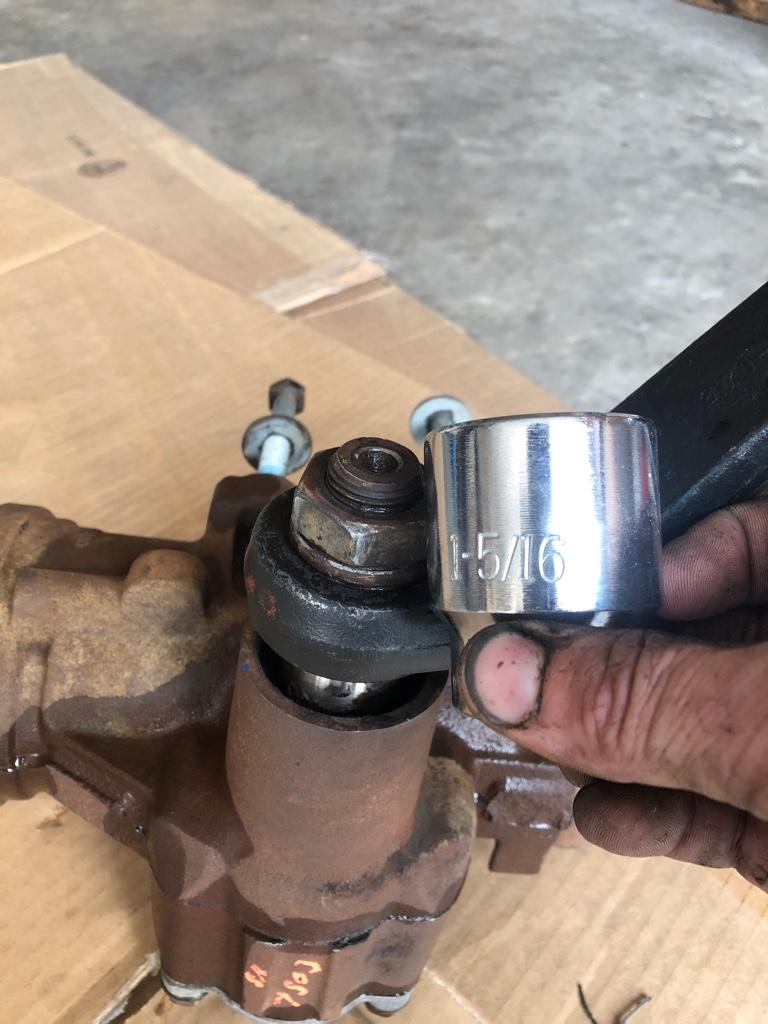 Discovered I need some new engine mounts too. Going with Brown Dog polyurethane for about $100.
It’s probably going to vibrate so much I regret my choice. With all the horsepower this thing makes it’s tearing apart rubber mounts. 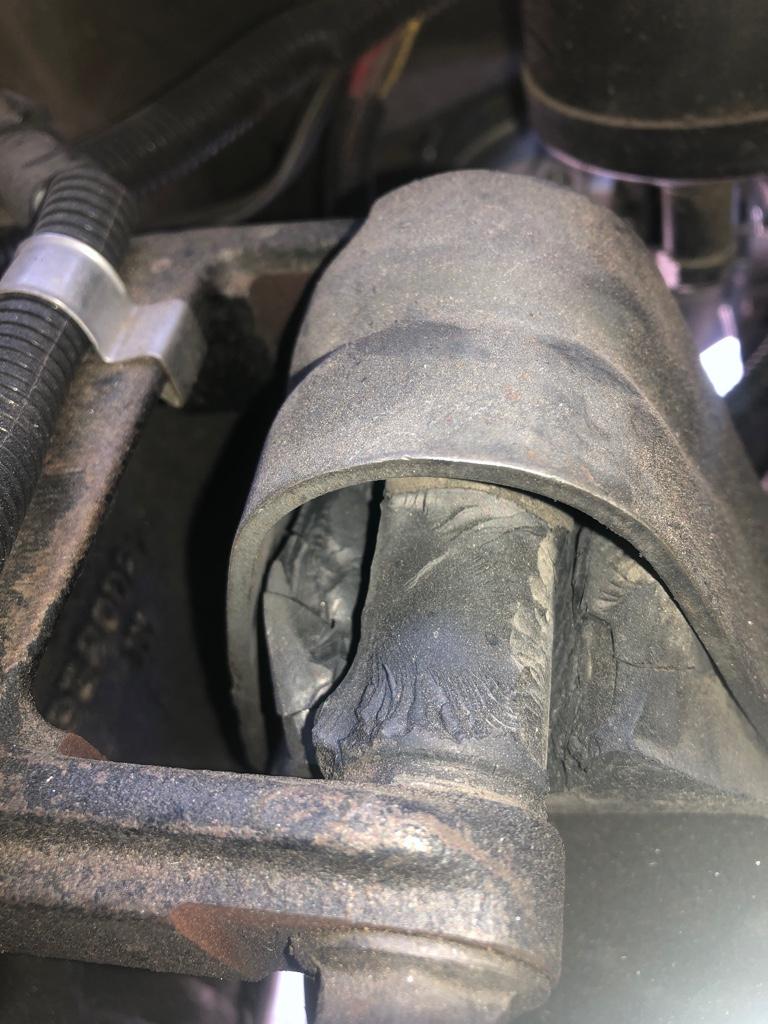 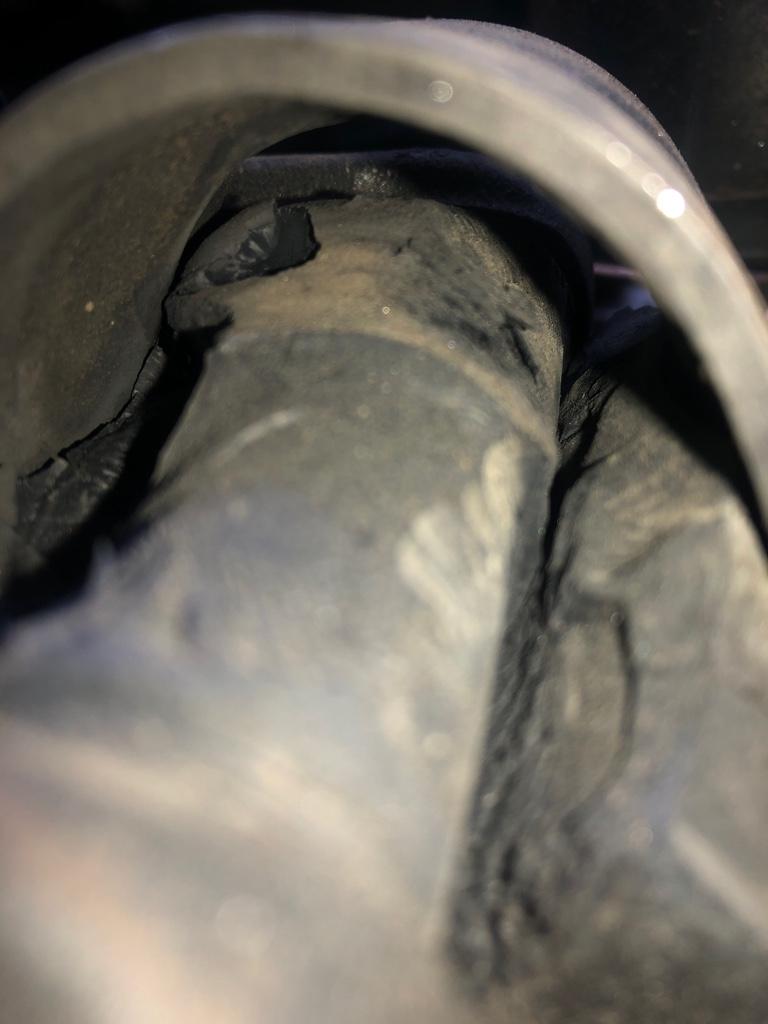 Staff member
Must be an aluminum vs. steel wheels. I can get a set of 40" Maxxis Trepadors on my TG beadlocks in about an hour. Removing them is another story.

Dennis said:
Must be an aluminum vs. steel wheels. I can get a set of 40" Maxxis Trepadors on my TG beadlocks in about an hour. Removing them is another story.
Click to expand...

You’ve probably done it more than once.

Now that I’ve done it 4 times I realize, as always, there is a reason people get paid to do this. Also why some tire shops won’t touch them. Maybe it IS an aluminum wheel thing combined with a new tire thing. Everyone on YouTube had aluminum locks with new wheels. Kick, kick, kick,DONE. I mean....it’s not like I had much else going on for the day.

Durango box installed. It is 3 turns to lock. Interestingly enough, my tires don’t run on the short arms anymore. I flushed it with a gallon of power steering fluid, installed a $23 inline filter from Oreily Auto Parts on the return line, and called it good. There was definitely a lot of BROWN fluid removed from the box. I also replaced the O ring on the low pressure line with a rubber one from a Harbor Freight kit. No I don’t remember the size and yes I should have noted it after all the research I did to try and find that piece of information.

Maybe I’ll drill and tap the stock box. 5” grade 8 bolts are a tad too long for this box to tighten up against the body. I can spin one of the washers I’m using as a spacer. Top bolt has 2 washers between it and the box, bottoms two bolts have one spacer washer. Bolts are touching the box and not letting it tighten down fully. Steering is definitely different. Almost more ‘rack and pinion’ feeling. It’s tighter and the steering wheel is now centered. Before it was pointing towards the 10:30 hour hand position even with any adjustments I could make to try to recenter it. Those adjustments resulted in the tie rod being at an angle I never felt comfortable with. It didn’t break in two trips BUT it just angled so much back I always thought I was on borrowed time.

Failed smog. Twice. First time I fixed it because one of the hoses to the EVAP canister was broken. Pressurized the gas tank enough to shoot gas at the kid testing the cap. High CO at idle and high throttle along with high HC PPM.
Second test I’m high for CO only at high throttle. After the test I discovered the idle was high while in park and it wasn’t coming down. I discovered a vacuum hose disconnected from the ‘junction box’ of vacuum connections by the air filter. I believe this cake apart when I was installing the Durango box and I never saw it because I never inspected it. Maybe I SHOULD keep getting this smog fed annually. So much can go wrong with such little things I’d never check without a smog. Imagine if Nevada had annual vehicle inspections.

Broken EVAP hose. I saw this a while ago and didn’t think much of it. Kind of assumed since it passed smog before it would pass again. Broke off the small section and jammed it back on. Idle CO and HC PPM problem fixed. Might should replace the hose itself since it’s probably older than me at this point. 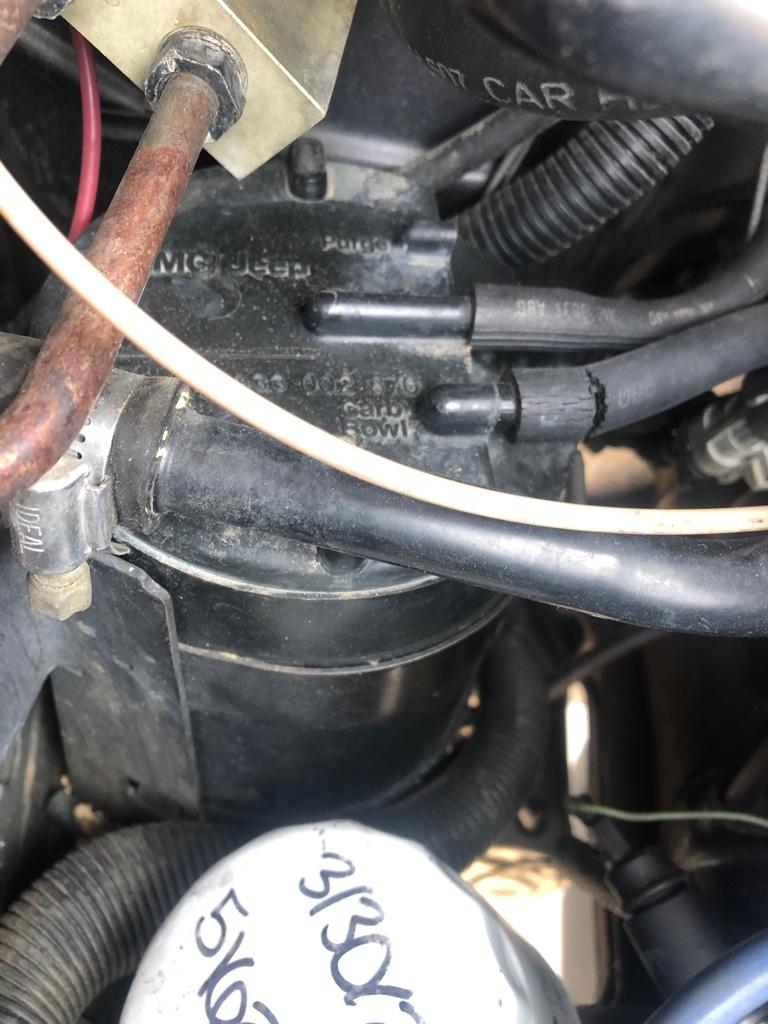 Since it still wouldn’t pass smog (high CO at high idle) I decided to tighten some bolts and create an exhaust leak. Also notified it looks like a stud is missing. So I ordered up a new exhaust gasket and some copper RTV to try and get it sealed. Hopefully there was a leak causing it to run rich and this fixes it. Also ordered an NTK oxygen sensor. Not cheap, but it’s supposed to be worth it. The cheap ones apparently don’t work well according to the experience of people on the internet. 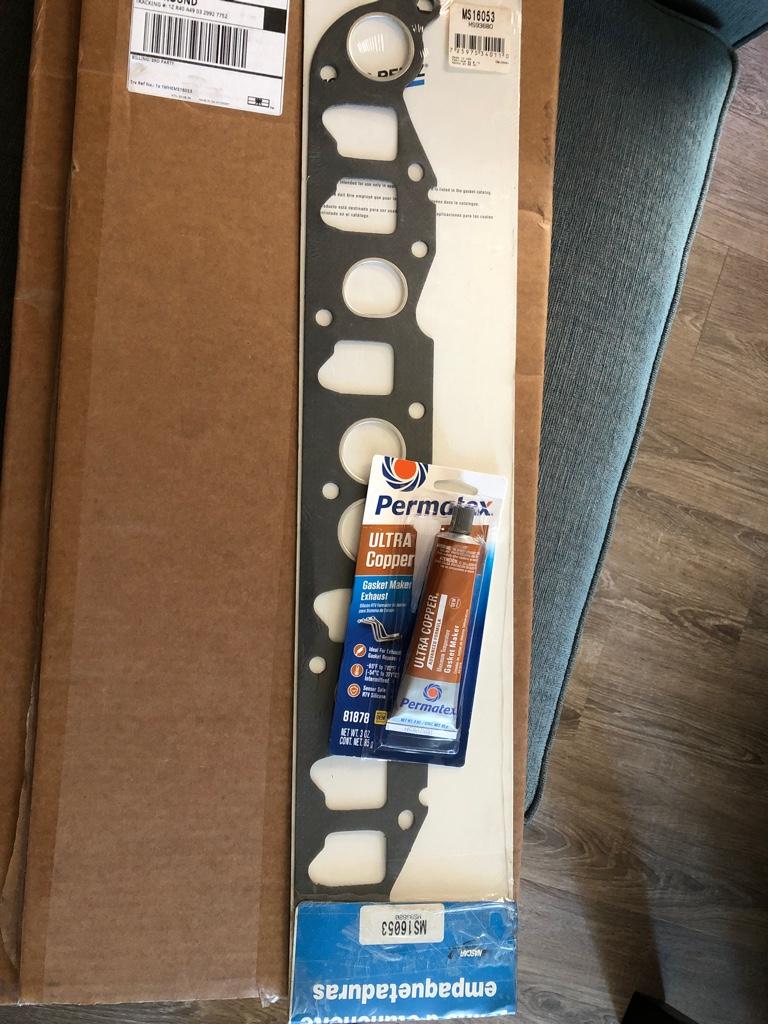 I also noticed the thermostat I replaced (even though it worked fine in a pot of hot water) is leaking slightly out the top. In all honestly I’m shocked since I used a new gasket and super 300 permatex again after scraping it all off.

Kind of noticed it looks a little low on ATF.

New motor mounts ordered over Labor Day will be mailed out Monday. Full 16 days like Brown Dog said on their website. Might wait until those show up to replace the intake/exhaust gasket. I think I need a moving permit to go get it smogged after this. COVID 19 registration extension ended around September 13.
A

It seems like you are having fun going on an adventure with this 30-year old jeep. I can't wait to see how the modification will turn out.

Well the exhaust leak is worse. Either the exhaust manifold is warped, the gasket was crap, I didn’t put down enough copper RTV (most likely) or a combination of the 3 came together. It runs rough at idle with the new gasket and you can hear a vacuum being pulled. So off it all comes in the near future and more fun ensues. So irritating that it didn’t just magically fix itself.

Currently looking at an LS swap to be done with the 4.0 liter. Too bad swapping in a 4L60E or 80E isn’t bolt in. Lots of customization required. Maybe in the long term future since the price of the engine from pick and pull with transmission would pay for the Artex truss I’m going with.

Exhaust leak turned out to be the vacuum hose from the MAP sensor to the throttle body. Man was I happy to find that. The copper RTV and Victor Reinz (NOT MAHLE like the amazon order says) are holding up just fine.

Replace the motor mounts with Brown Dog Polyurethane. I notice more light vibrations. I don’t care about that because I don’t want the rubber to crack, and it’s nothing like what I expected based on other people’s reviews. Plus this is an off road toy first and daily driver second so I’m not too worried about it. I’d rather know the engine is firmly mounted into place than go back to the soft ride I have.

It wasn’t fun. Driver side went just fine. Little bit of work but nothing extensive. Passenger side required a few HOURS of work for me. The engine was twisted so that it was at the very front of the engine mount. Lifting/lowering/pushing/pulling/prying/crying in every direction from both sides and below just wouldn’t do it. Nothing seemed to work so on DAY TWO I pulled out the GoPro, lines up the holes the best I could see and shoved the bolt in. Eventually I grew the balls to try tightening the bolt through the two mounts and it started poking through. I put the bolt in backwards because the radiator side of things was giving me so many problems with not aligning I wanted to start there. Well I discovered on the Renix engine the bolt only goes one way. So our came the grinder and off came the end of the bolt.

It probably deserves an like change now and maybe some more ATF since THAT seems to be low and I swear I added enough when I reinstalled the transmission. I’ll try to remember to post photos of the engine bolt I cut. Nothing eventful on the driver side. 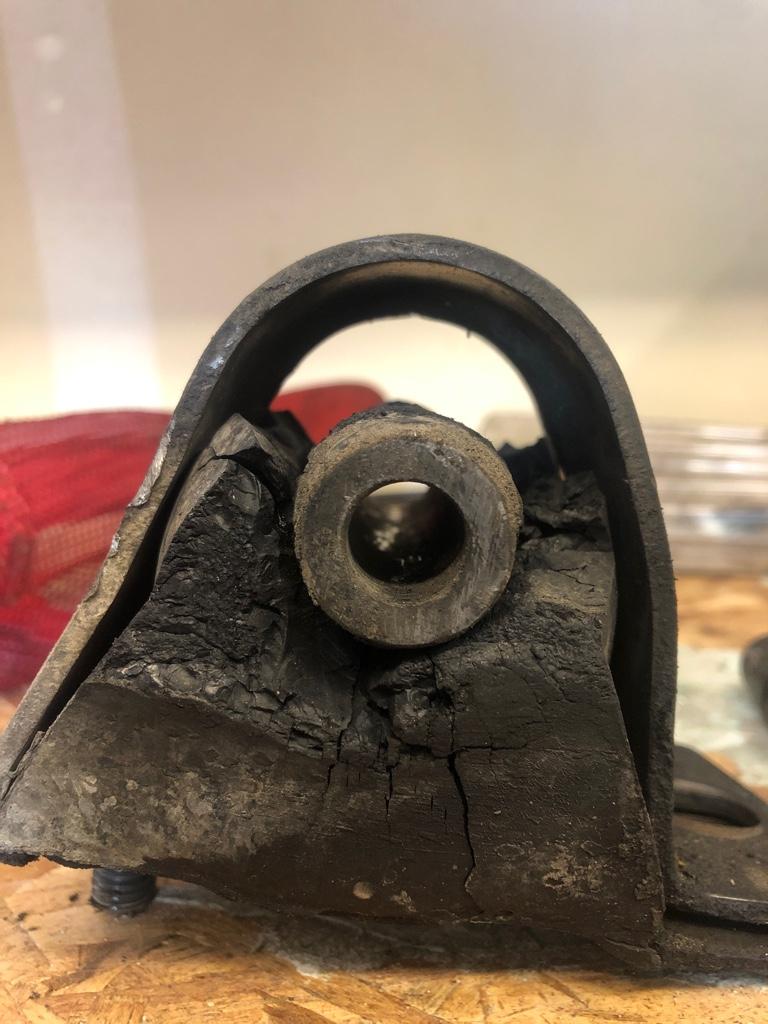 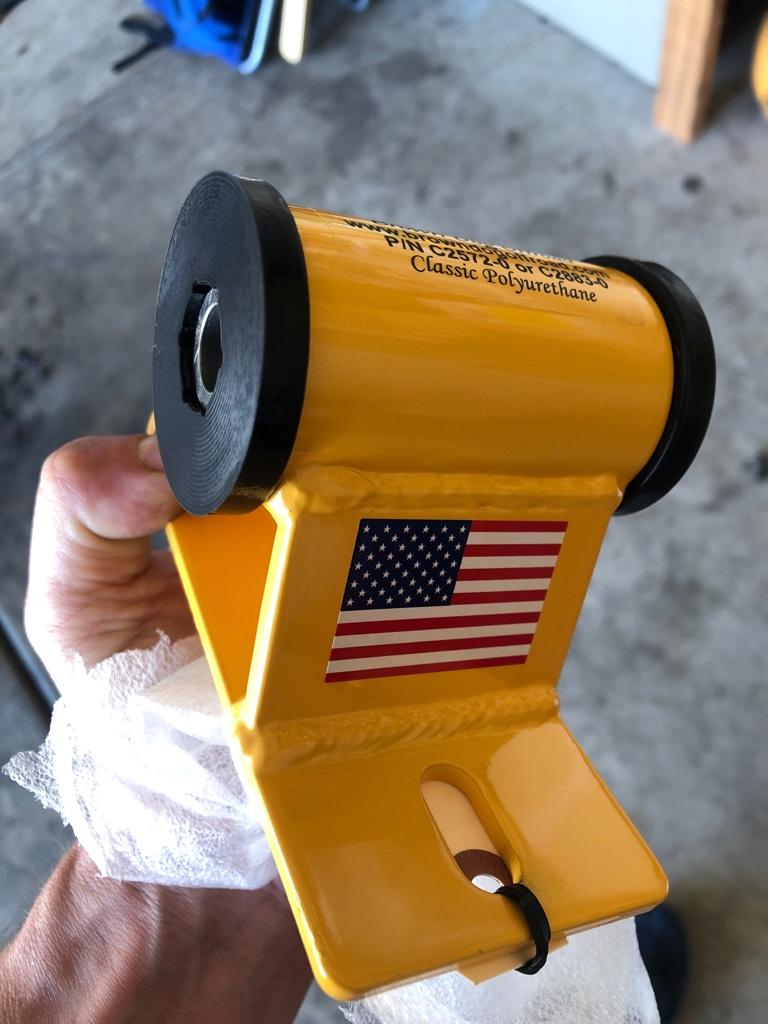 I also scored some locking hubs for $150. Thankfully these WERE NOT on the book of faces because they would have been GONE. Guy was even cool enough to hold them until I showed up with a second offer standing in front of him buying more parts. Yeah. Karma is a thing. I listed his advertisement in some local groups and i WOULD have bought the 38” boogers on 16” aluminum Eagle alloy beadlocks if they were 17s. Yeah they looked like a few trips old and definitely not destroyed. 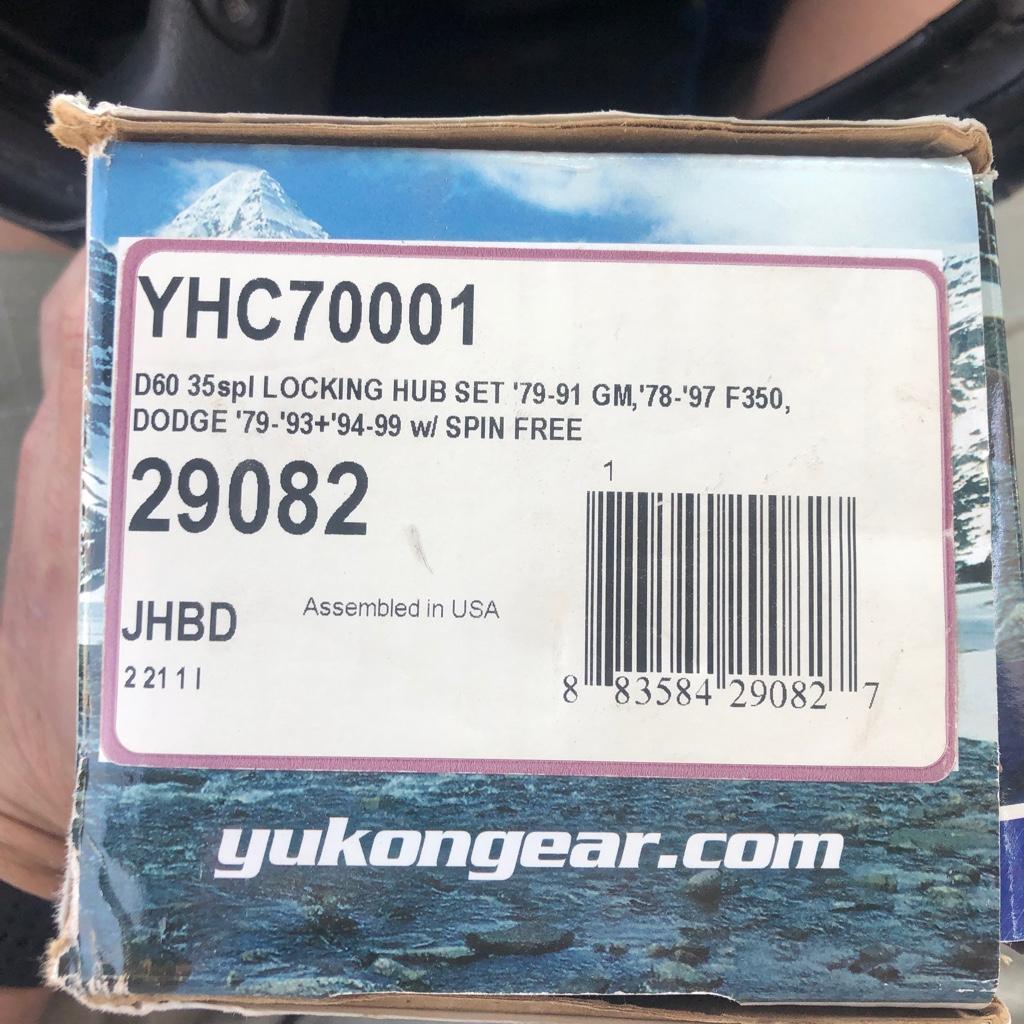 Premium Member
I'm glad you found your exhaust problem. Things like that can be a pain. It sounds like you're getting it built pretty well. What size tires did you get? It looks like probably 40s, but I can't tell for sure. 40s and tons will rock on an XJ!

Friend ended up getting me some well used 40s. They’ll work for getting axles under it and driving around or spares I think. His friend was replacing them, he had them at his place and when he told me to get all my stuff out they came with delivery so I just mounted them on beadlocks.

The Jeep now has death wobble.

I tightened the track bar bracket up. It was VERY loose. It improved things but the death wobble still exists. I really don’t want to spend $450 on new ball joints and tie rods for this thing. Seems like a waste with an upcoming axle swap, and also it’s a Dana 30 under a Jeep Cherokee. It’s not a 3/4 ton truck. Wtf makes them so expensive ?
You must log in or register to reply here.
Share:
Facebook Twitter Reddit Pinterest Tumblr WhatsApp Email Link
Top