CashMoney said:
might put an extra zerk fitting or two so it gets all the sides and ends
Click to expand...

Yea I ran out of zerk fittings haha


BUILTnotBOUGHT said:
Square drivelines kick ass, I don't care what people say about binding and such
Click to expand...

Shinobi said:
I haven't got the chance to wheel with it yet but so far it looks promising
Click to expand...

Staff member
So in July of last year, I threw a rod at the first water crossing at fordyce... since water does not compress lol

Original plan was to throw a hemi into it but that went out the window real quick after finding out the hemi I picked up had a bad head.
So then I got my gf's brothers xj since he got a new car. So I decided to throw the whole drive train into the YJ. Threw on a new header There was two ways I could go about this, first was just use the XJ harness and splice the whole thing into the YJ, second was to use the YJ's harness, swap all the yj stuff on to the new engine and splice in the AW4 into the yj harness. I decided to go with the second route....swapping the Yj stuff to the new engine was cake the daunting part was the wiring... So I picked the Transmission connections and the TCU connection and removed them gently from the xj harness.

Then I had some diagrams I got online and starting labeling them.

Then came the splicing into the YJ ECU. Apparently the diagram I got , the colors do not match but the locations seem to be the same (didn't think there was a difference between 1992 and 1993). So I decided to just crimp them together first to test them out before I solder all the new connections. Awesome Kanin. I hate wiring. All the wires are intimidating haha. Hope it all works out! I'm impressed!!

Staff member
Thanks man ! As long as you have all the wiring diagrams its actually pretty simple.

Started her up for the first time with the new engine today ... forgot that I don't have my cooler installed yet for the trans and shot atf every where haha

Staff member
She is finally movable !!! After getting the right diagrams from all data I was finally able to get the right wires in the right place. Most of the 93 was correct but not exactly due to the different colors. But she is finally running and pretty well besides running a little lean. Hey Kanin, How's the shackle reversal working for you? Anything you'd do different?
N

i miss Darin he was a fun and great guy i used to hang around with him,dean,rory,john that whole crew.

Staff member
Welp bring this thread back from the dead ....

Finally decided to start on the 3 link that Ive been wanting to do for about 5 years now ... No turning back now ! Are you still living in the north valleys?

tahoe1028 said:
Are you still living in the north valleys?
Click to expand...

Staff member
Yes and no .. it is a 79 king pin dana 60 but not a snow fighter. From what I have gathered its from a 4wd van which was the reason for the low pinion instead of high pinion.

Premium Member
Anything new going on?

Staff member
Yes actually, was on vacation so didn't do much last 2 weeks. But got cranking this week and weekend.

Welded on the truss and and got the brackets kinda where they needed to be. Ran into an issue with the track bar wanting to be in the same spot as the coil bucket but I think I got that fixed with the ruff stuff track bar bracket. 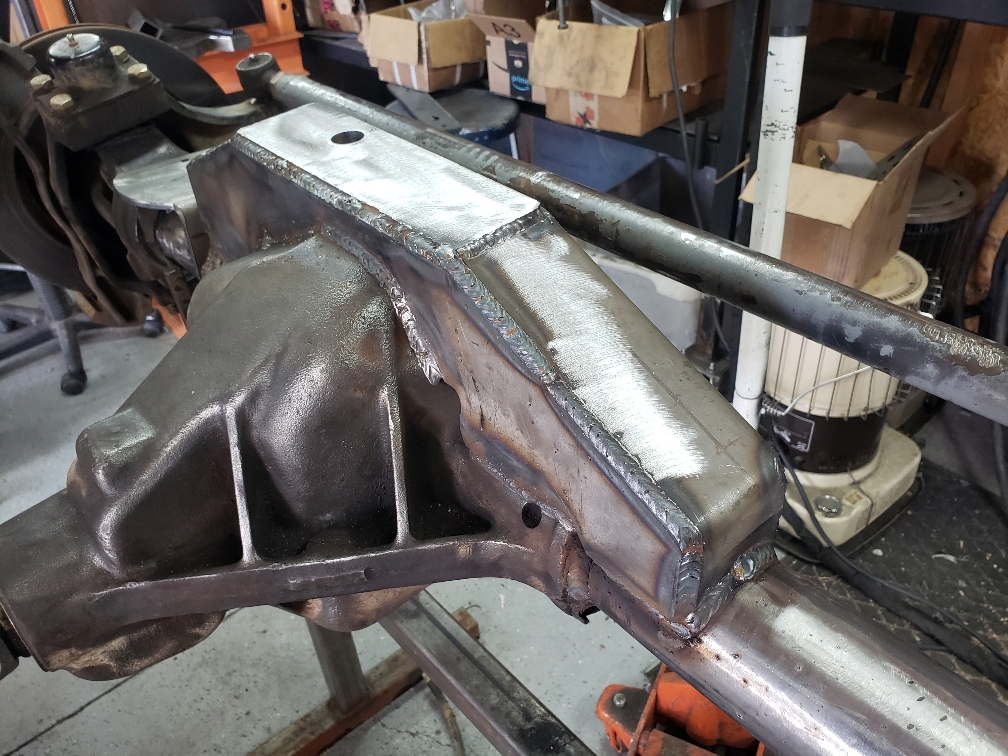 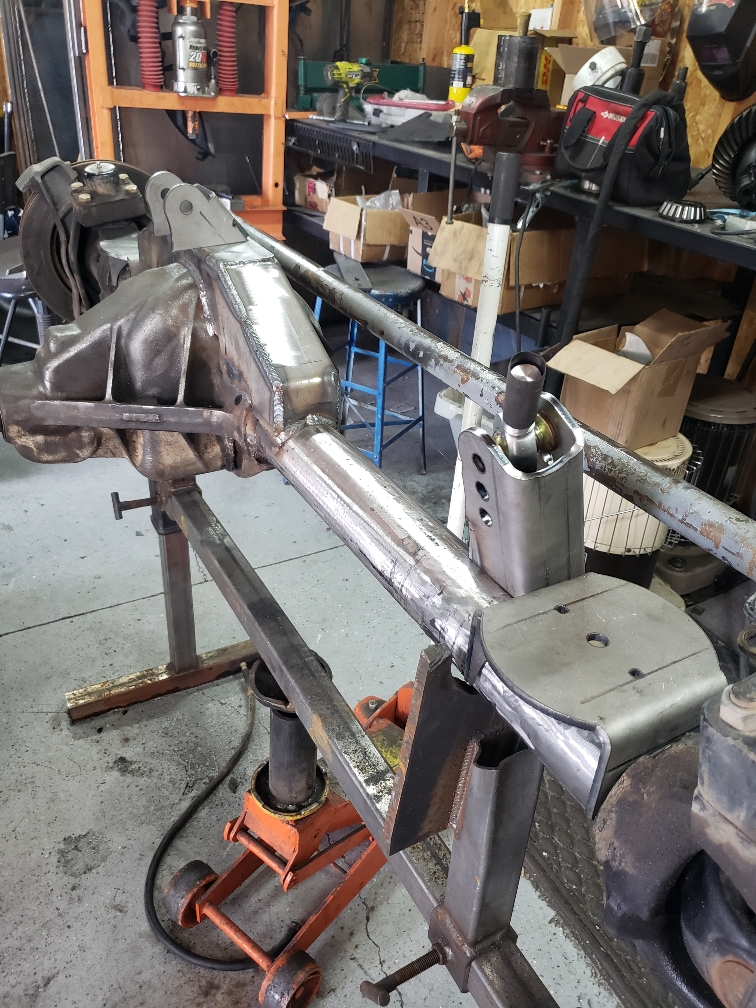 Made some frame side brackets as well, kinda a mix of balistic and ruff stuff brackets. 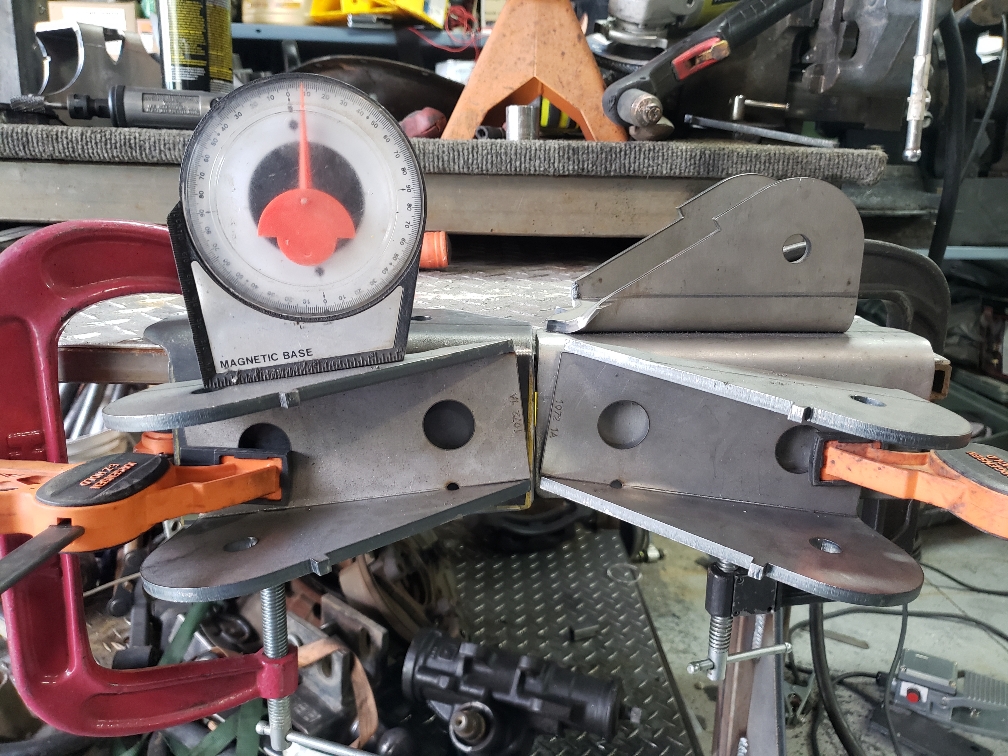 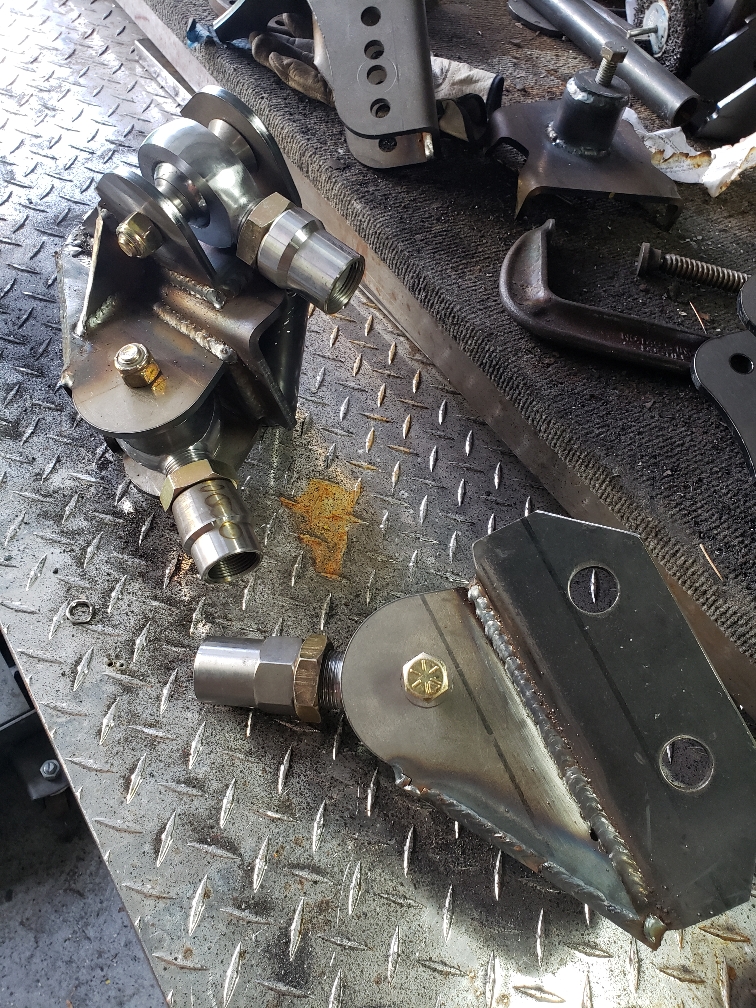 Got the axle under the jeep and got all the brackets tacked in. 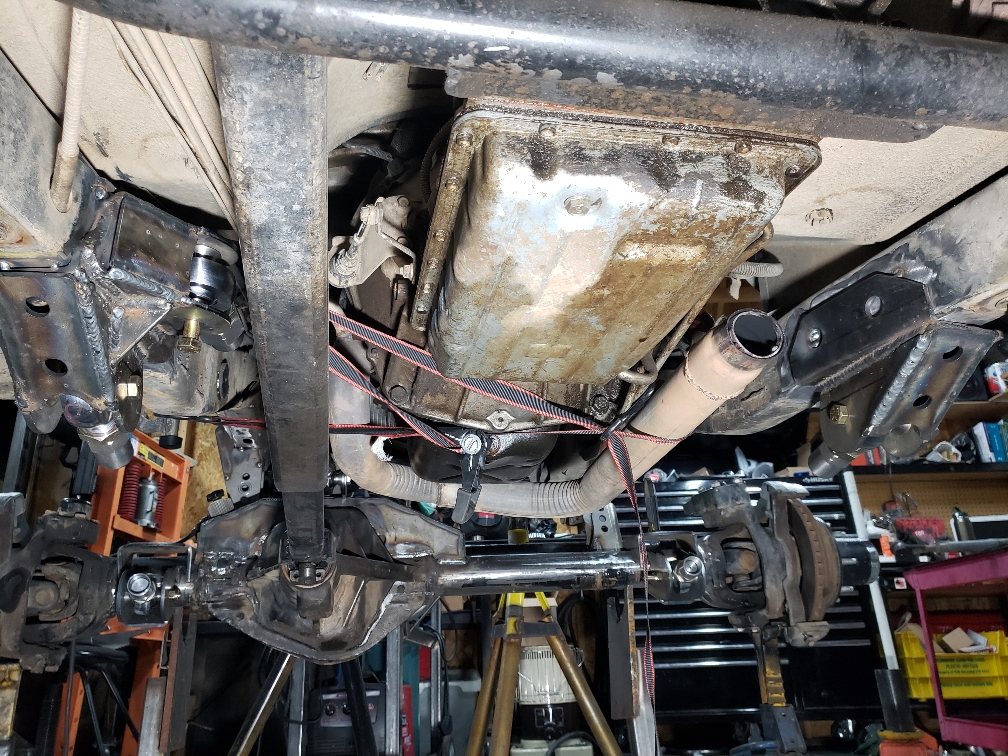 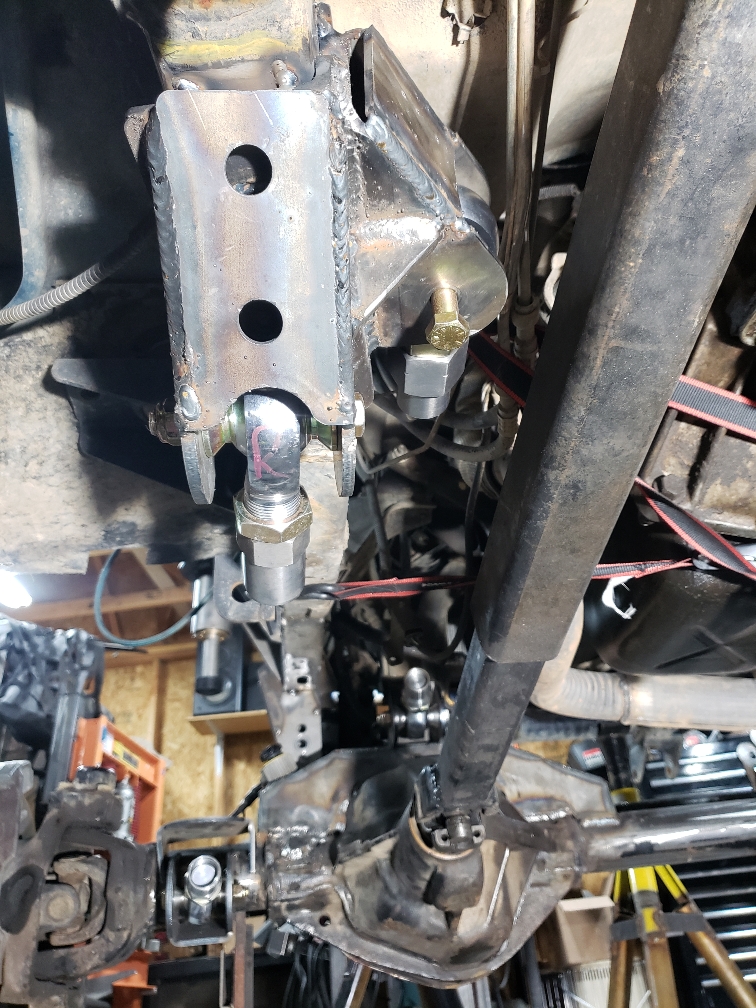 Set my separation of the upper and lower at 25% of tire size (10in). The links ended up being 36 on the upper and 33 on the lower, I wanted to keep them the same length but I think it should be alright once I start adjusting the links to set the caster and such. 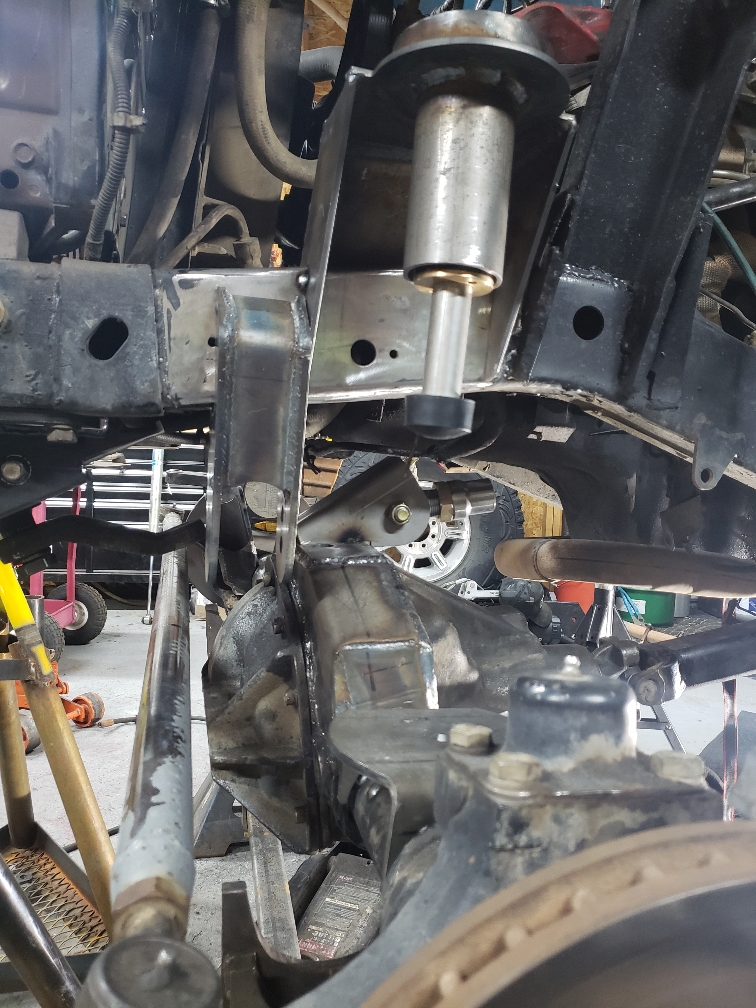 Also going to need a flat pitman arm, since I push the axle forward a couple inches.

Staff member
Cut and tacked all the links and did a little flex test. Got the flat pitman arm from WFO. Definitely helped with some clearance. I think she's going to flex real nice ! 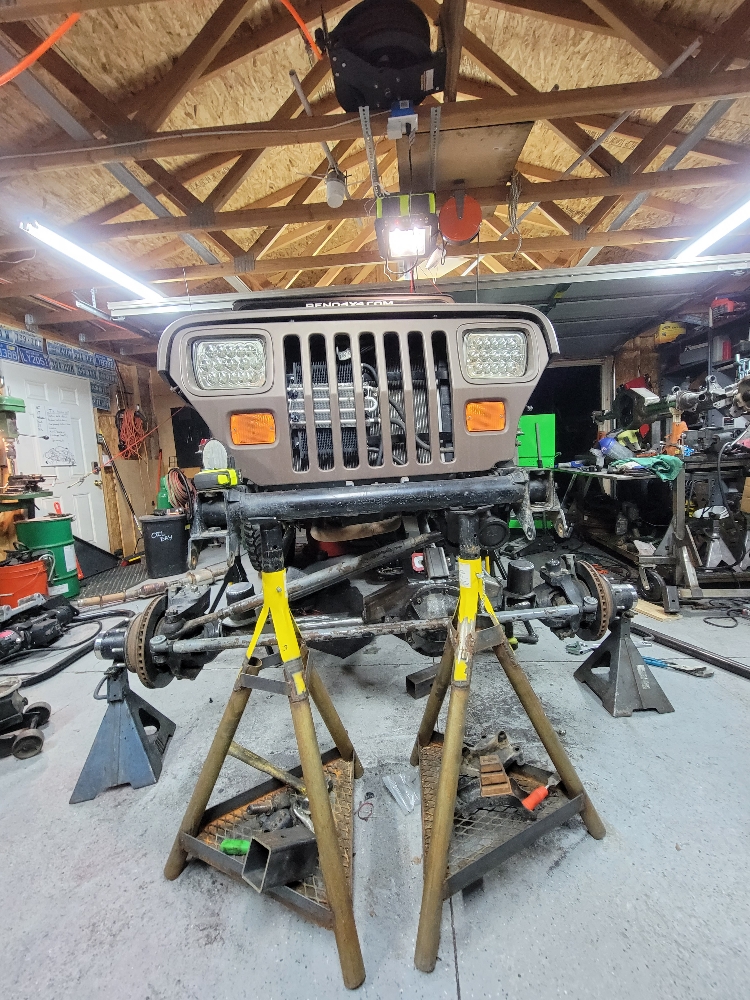 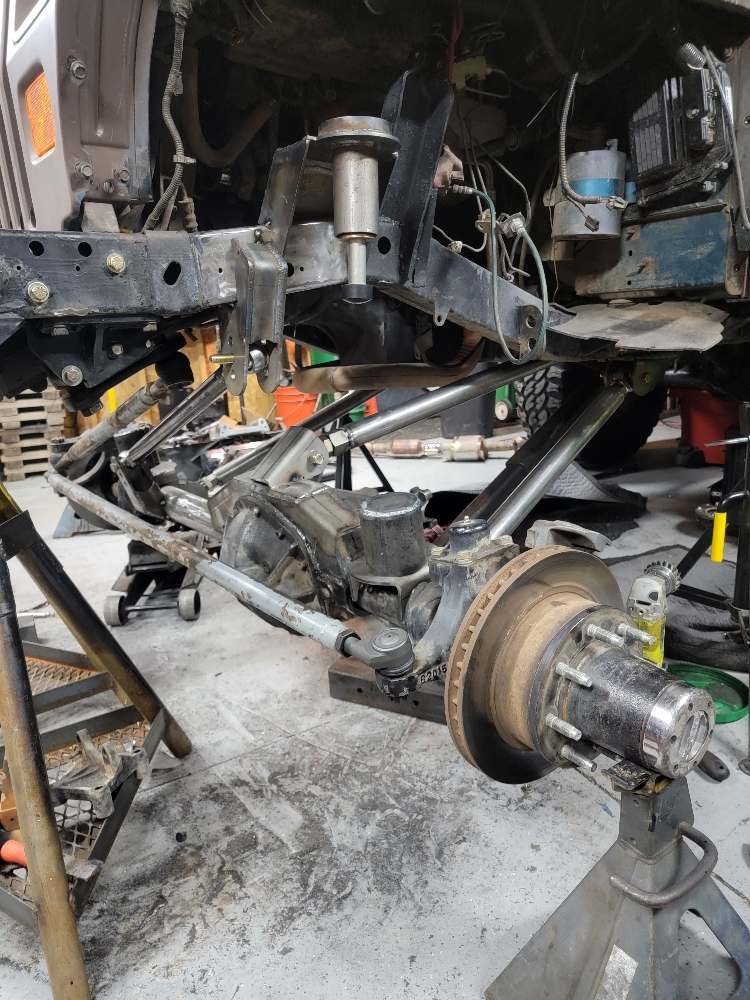 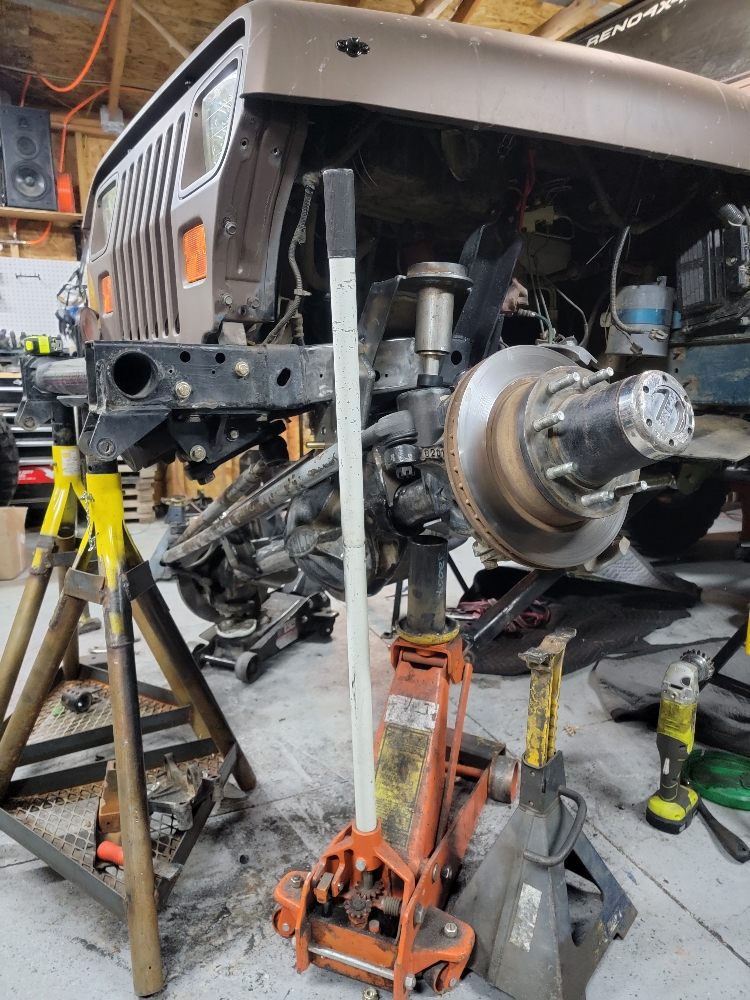 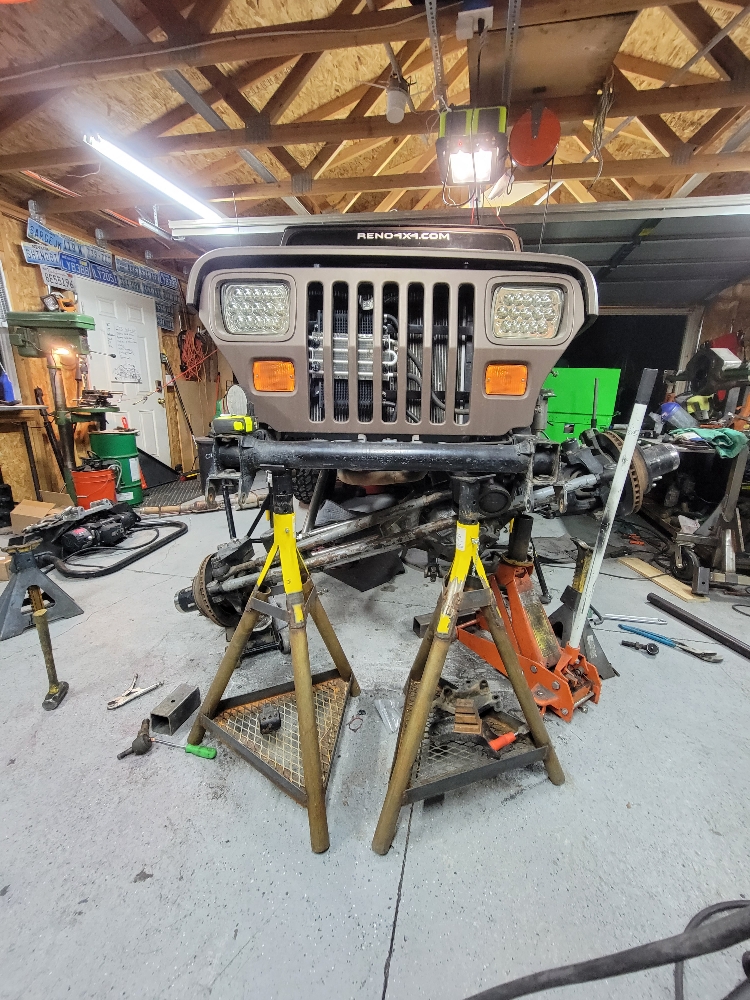 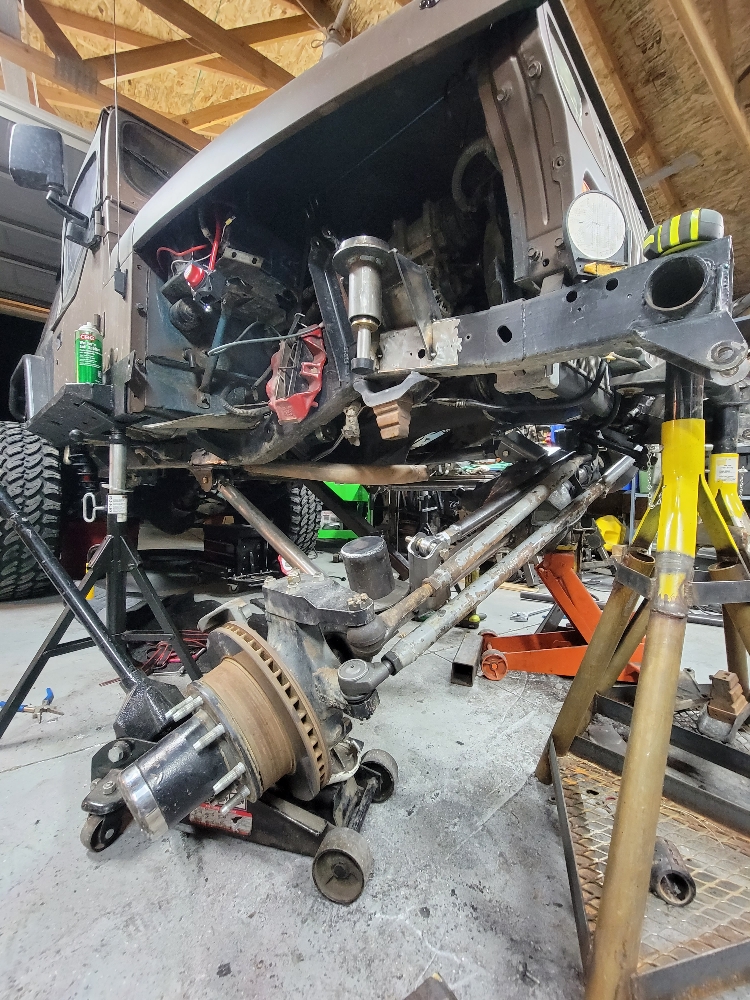 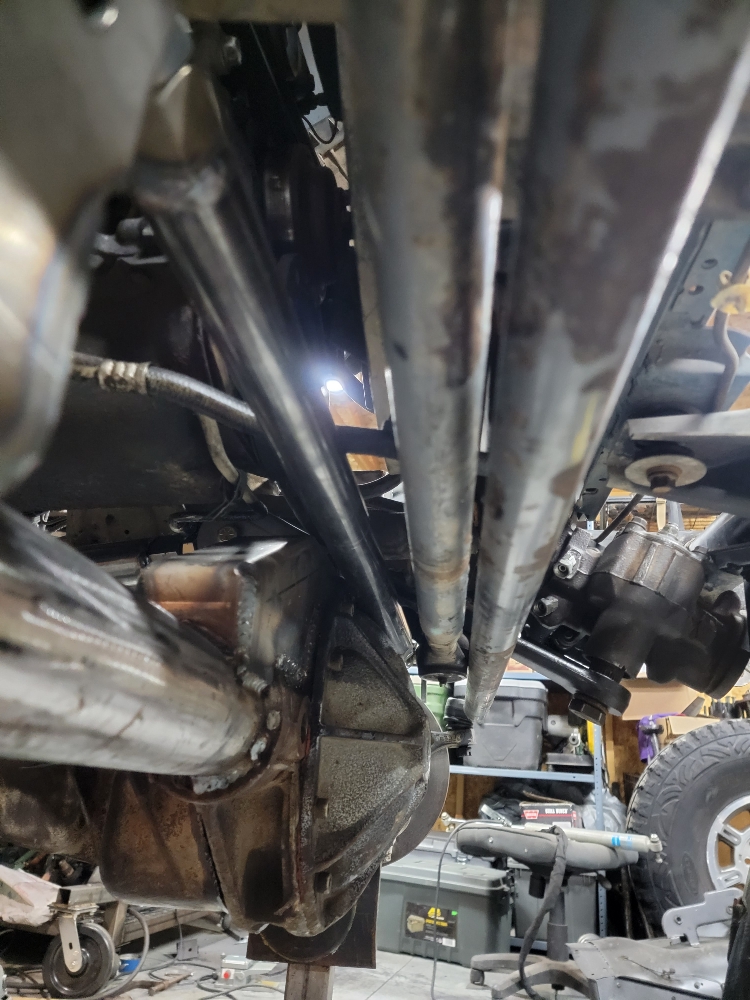 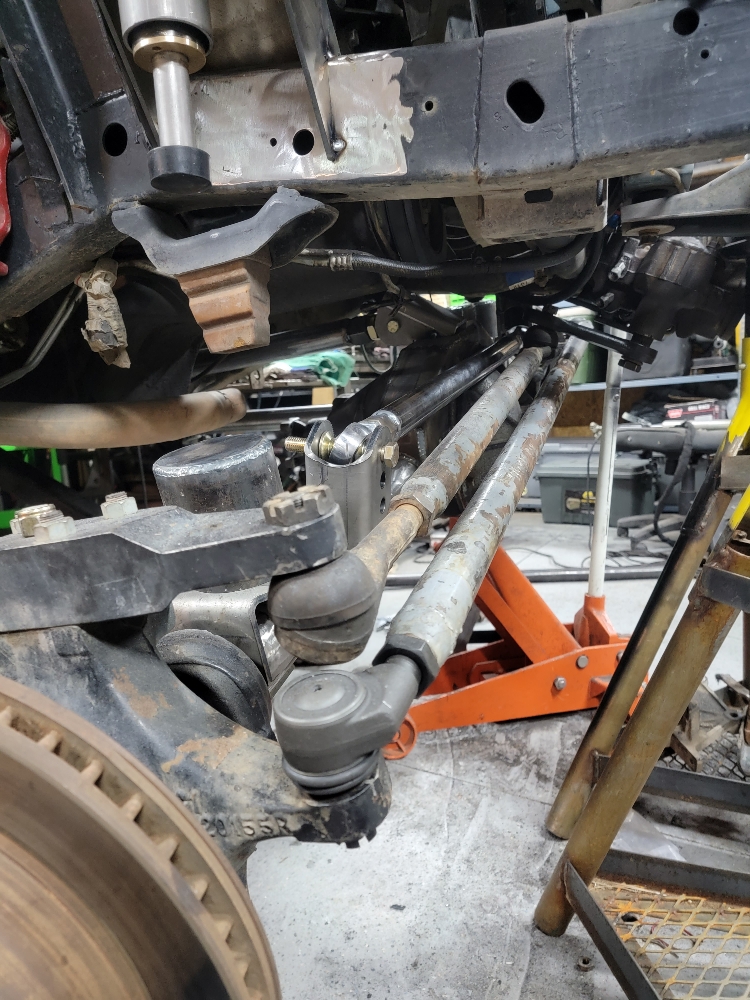 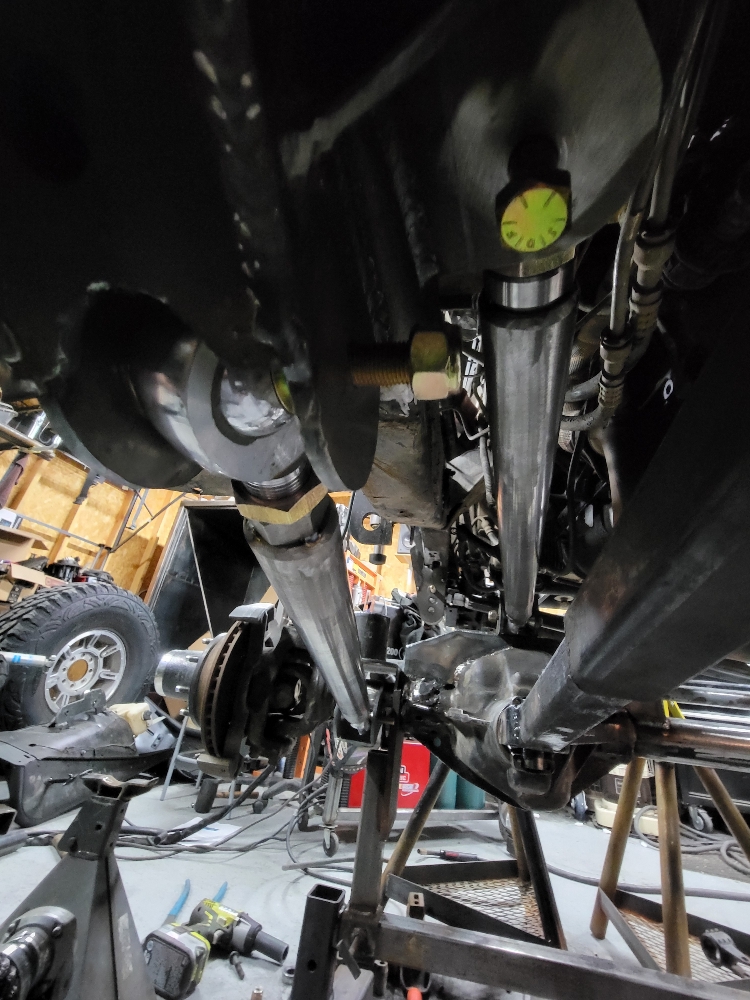 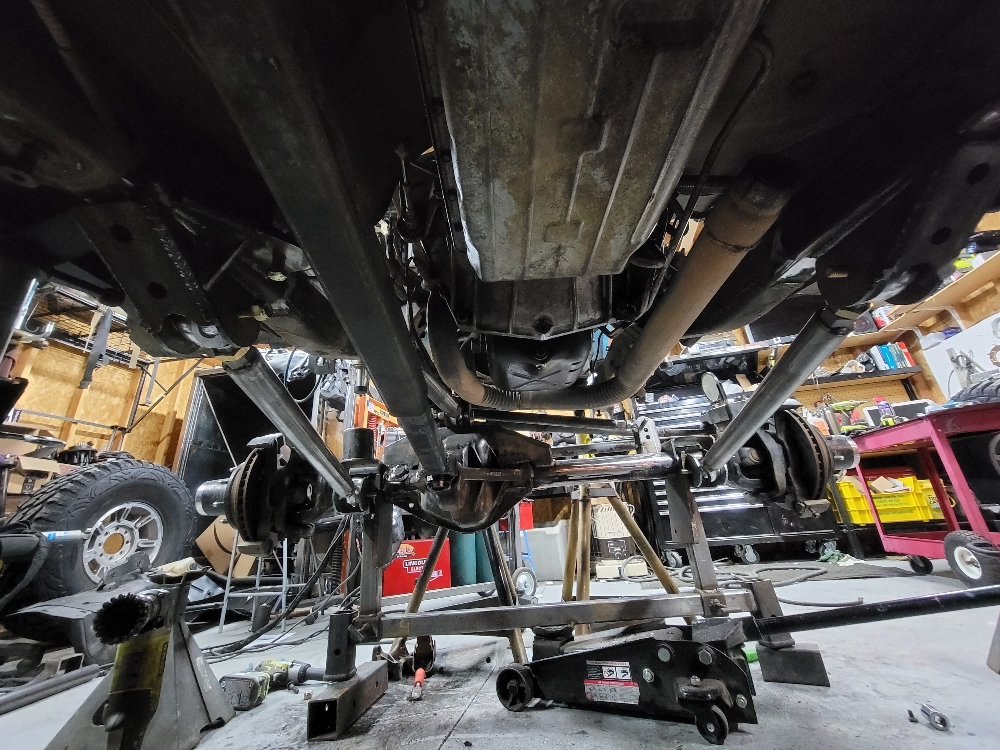 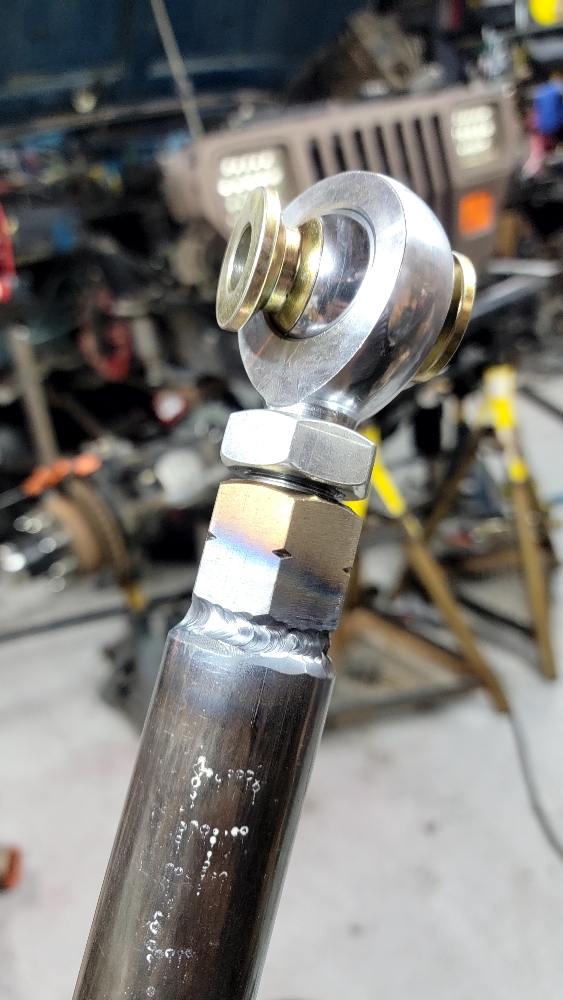 Sent from my SM-G998U using Tapatalk

Reno4x4 Vendor
Are you going to do a cover pass over the root weld on the tube nut?


Sent from my iPhone using Tapatalk

Dr Smash said:
Are you going to do a cover pass over the root weld on the tube nut?


Sent from my iPhone using Tapatalk
Click to expand...

Yes sir! I was just excited I got a decent root pass!

Sent from my SM-G998U using Tapatalk

Yea it is. I'm going to add some additional bumpstop so it doesn't hit.