I stayed at a buddy's place this weekend, and he's got some steel from me on his home range. One plate is an old piece of mild steel I scrounged for him, the other was an early prototype target for his department (he's a deputy in CA).

I took the opportunity to take a couple photos and write down my observations, because I typically never have mild steel on my ranges.

The targets have been up for about a year. It's a pistol range, but occasionally a rifle sneaks onto it. When something other than a non-magnum pistol caliber is used on the range, he's careful to make sure it only goes at the AR500 target. As a result, the mild steel target is holding up very well, but the difference between the two is obvious when you look at it close.

I'll probably be swapping out his mild steel target for more AR500 this summer, before the surface turns into a moonscape.

It looks like I'll be cutting 1" AR500 this month, which is a rare thing to happen. If anyone has been looking for 50 BMG targets, now is the time to ask. 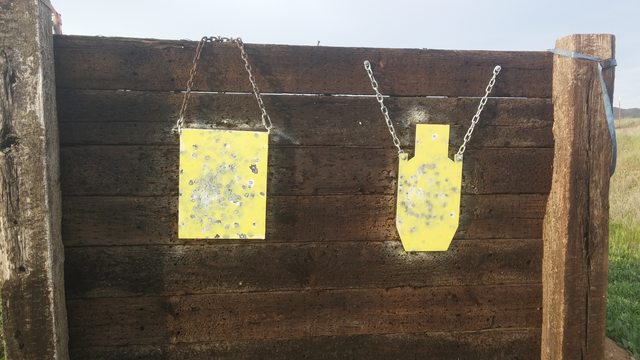 1" mild steel rectangle on left is approximately 15x20". The target on the right is an IPSC Metric less the D-zone, in 3/8" AR500. Hung with 1/4" chains against a railroad tie backstop (basically no swing).

As of May 5, 2014, targets have been hung for about one year. A total of approximately 2,000 rounds fired down range, the majority of which are 40S&W. 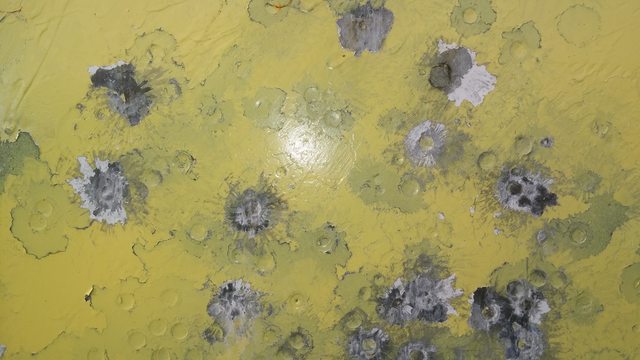 Closeup of mild steel plate. Visible impacts are all 9mm, 40S&W, and 45ACP. On this private range owned by a law enforcement officer, pistols are used as close as seven yards. MOA recommends no closer than 12 yards for pistols due to concerns of lead and copper jacket splashing back. 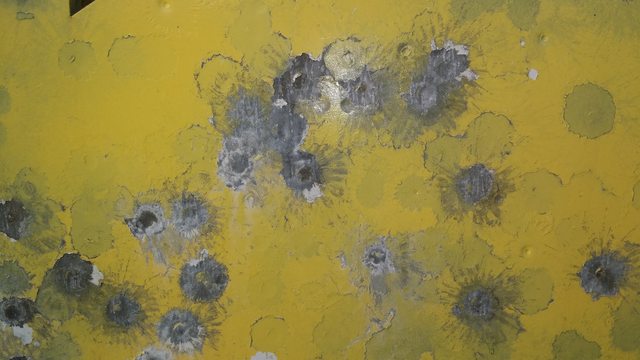 Places paint has been removed and repainted with no impact mark are from 9mm, 40S&W, and 45ACP. On this private range owned by a law enforcement officer, pistols are used as close as seven yards. MOA recommends no closer than 12 yards for pistols due to concerns of lead and copper jacket splashing back.

There ya go. Thought you guys might enjoy this. As always, use common sense. I personally wouldn't have mounted these the same way that my buddy did, there isn't enough forward angle, it's against a hard backstop so it can't swing, and he shoots at it closer than I recommend. Plus, ewww, mild steel target?
D

Yup I got your knock downs in AR500 and I got some in just mild steel that I've had for a while and there's no competition. The mild steel has been beat to shit. The occasional 223 close at 75 blows right thru but not on the AR500.
You must log in or register to reply here.
Share:
Email Share Link
Top